How I failed, what I did learn, how I changed for good

On New Year’s eve a few years ago, after one too many glasses of Prosecco, I made the bold decision to stop clothes shopping for a year. You would think that this is the sort of thing you will forget about the morning after while nursing your hangover, but no – I didn’t. The morning after I confidently strode into the kitchen and arrogantly announced to my other half and my mum that this would be the year where I completely overhauled myself and became the incredibly responsible human I was meant to be. I harassed all my friends with this project, preached about the evils of fast fashion, barked at anyone who would question my noble ambition, and lasted about three months. Or, two and half to be precise.

I could blame the cause of my failure to some big life changes, but the reality is that what made my willpower crush like a badly assembled Ikea bookcase, was a small pink crossbody bag on sale. You would think that it should take more than that to destroy such strong ideals about anti capitalism and sustainability, but no. At the end of the day, I am a pretty simple creature. I like pink and I will not lie.

However. The simple act of making such a drastic decision changed me, and my consumer habits, for good.

What drove me to the decision

One day, I opened my overflowing wardrobe, tripped over several pairs of shoes, looked into my bank statement, and cried. Ok, I didn’t do all at the same time, but you get the picture. Anyway, one fine day, I decided it was time for me to stop using money I didn’t have for clothes I didn’t need. I thought to myself, this is like having five pints of milk in the fridge and going to buy another five. Whenever will I drink all that milk? Or, as my husband asked me with mild concern once I came home with the umpteenth pair of shoes, “but, how many feet do you have..??”. I did not come to this decision entirely out of the blue. Since moving to the UK, I felt that my consumer habits had changed. It was the first time I was exposed to fast fashion (yep, I am so old that we didn’t have Primark in Rome back in the day..) and it was naturally exhilarating. To be able to buy an entire outfit for a night out on my tiny student budget was frankly mind blowing. The novelty, however, wore off pretty quickly, and left me with a wardrobe full of crappy quality clothes, and the feeling that something wasn’t quite right.

I started dipping in and out of the minimalist movement. I went through the obligatory Marie Kondo phase but still felt a bit queasy about the whole consumption situation. Clearly we all want to have tidy houses filled only with stuff that ‘gives us joy’, but what about all the rest? Where was all the non-recyclable crap we accumulated over a lifetime of overconsumption going? My lightbulb moment eventually came while watching The True Cost documentary. I decided that I was truly done with fast fashion. I mean – I always knew that if I bought a top for five pounds, somewhere, something was fundamentally wrong – but did I ever stop to think about the permanent damage fast fashion was inflicting upon its workers and the planet? I decided to start educating myself about sustainable clothing choices and making the world a better place. I thought that I would start this moral overhaul by stopping to buy clothes for a year and using what I had. Sounds easy, right?

Why it didn’t work out for me

I’m afraid that the cold turkey approach does not work for me. A ban, on anything, works for a few weeks and then I go through a period of doing the exact opposite of what I had planned not to do. Like the time, several years ago, when I decided that I was going to quit smoking, sugar, caffeine and alcohol in the same month. Not only was I a miserable human for a few days, I also forced my long suffering husband into this healthy, yet, masochist detox. I brightly chose January to start this venture (possibly the darkest, and most miserable month in Scotland) and chucked out all the various offenders from the house like a maniac. It was an awful, awful week. Everybody in the house, feline inhabitants included, were miserable, extremely irritable and snapping at each other for no apparent reason. Then, one fine day, I opened one of the most neglected cabinets in our kitchen to find out that my chocolate hiding place had also become my husband’s cigarette hiding spot. So, while he had been hiding in the bathroom smoking at the window like a teenager hiding from his parents, I had been savouring  Lindt milk chocolate bars in the kitchen while cooking a variety of uninspired free-from  meals. After the discovery of the cabinet of sins, we decided to call it a day. We ordered a pizza and had it with a lovely bottle of red wine. But I am going to tell you this – after that disastrous experience, we did actually quit smoking, we now have only coffee in the morning, and are much, much more mindful of sugar and alcohol consumption. But all of this did not happen in a week, it happened over time, slowly and naturally. I guess that what I am trying to say here, is:

So, you will now be wondering, did I hide a mountain of new clothes in the cabinet of sins? Well, no! First of all, it was a very small cabinet, only fit to small sins like chocolate. Secondly, I did not buy mountains of clothes. But I did buy some items. During what was supposed to be my non shopping year a lot of lifestyle changes occurred, and I could not face some of them only with the items I already had in my wardrobe. For example, I changed my job and it became evident that I needed some semi respectable work clothes in my new position. Then, we moved into a new, wonderful house, very close to beautiful woods, and it turns out that suede ankle boots are not the best choice for this kind of terrain. Go figure. Oh, also, the year I decided to quit shopping was the year that we got married and I didn’t already have a wedding dress hanging in my closet (the one I got was the stuff of my dreams, but that’s a story for another time).

What I did learn, and how I changed my shopping habits

At the end of the day, I had to have a big reality check. Yes, having big ideals is amazing, but sometimes ideals and reality can clash. There is no point in feeling miserable and uncomfortable in situations where you are instead required to be presentable and confident. Lifestyle changes are often unexpected, so our wardrobes will not always be prepared for them. However, while I did not stop shopping entirely, I entirely changed the way I shop. First of all, I started becoming very organised with my wardrobe – I sorted it into seasons, kept only what I actually loved and used, and what did fit me and the temperamental climate I live in. The rest I sold and donated. Instead of going out and buying a whole new wardrobe, I worked with what I had and identified the missing bits. I made a list of what I needed and researched extensively for the best quality items I could afford. The decision to stop shopping for a year, albeit unsuccessfully achieved, actually changed the way I shop forever. I became a mindful consumer. Since that fateful decision, anytime I buy something I ask myself a few questions: do I really need it? Does it add value to my life? And most importantly: Who made it? Were they treated fairly? Do I feel comfortable supporting this brand?

Ultimately, I am very aware that being in the position of choosing to stop shopping is a privileged one. So I will conclude by saying that the single most important teaching of my (failed) shopping ban has been to re-learn the importance of gratitude. Nowadays, I open my (very organised) wardrobe and I am grateful for every single item hanging in there.The journey towards sustainable fashion is not an easy one, but it is one I am proud of every day. 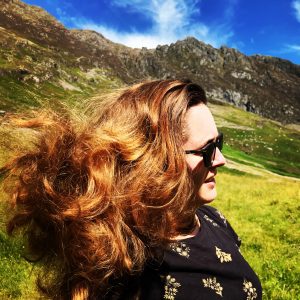 I am Barbara, an Italian lass living in Scotland. I Owe It To Spaghetti is a lifestyle blog that wants to inspire you to live your best life, everyday, with elegance, joy, and fun. It focuses on timeless style, sustainable fashion, simple life, and genuine, wholesome food. You can read more about me here!

Sure - spring is lovely, summer (the rare times it

Treated my super mamma to an at home afternoon tea

Finally back to writing! Today on the blog I tell

We had a lovely sunny weekend, enjoying Haddington